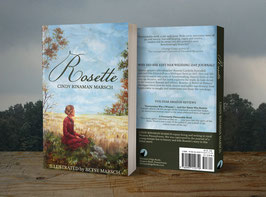 The novel, enhanced with beautiful fonts and 24 charcoal illustrations. Autographed, with dedication of your choice. Or buy on Amazon and order an autographed bookplate here.  The beautiful gift card option may be completed or sent blank as you direct. Order with SOLOMON RAMSDELL for additional savings.

Learn more about all these works and their origins at RosetteBook.com .

Rosette: A Novel of Pioneer Michigan

When almost-spinster school teacher Rosette Cordelia Ramsdell met Otis Churchill on a Michigan farm in 1856, she thought he might be the one. Her real-life journal tells what happened over the next two years. History tells what happened over the next six decades. This literary historical novel explores the truth.
We meet Rosette in 1888 as she revises a crucial page of her journal, then we live the journal's entries in the voices of Rosette and others around her. In lush detail, this novel by Cindy Rinaman Marsch traces how we both choose and suffer our destiny. It shows how hopes that have come to naught can sometimes rise again from the wreckage.
Learn more about Rosette's world at RosetteBook.com .
RETAILERS: Both novels are available through IngramSpark.com at 55% discount
ISBN: 978-0-9971127-1-9 (paperback ROSETTE)
ISBN: 978-0-9971127-3-3 (paperback SOLOMON RAMSDELL)

Blizzard: A Story of Dakota Territory

Rosette may have lived through the infamous Children's Blizzard of 1888 in Dakota Territory, and this short story takes us through those terrifying days as she shares them with her son and his young family--with a baby due at any moment. This story is free with Kindle Unlimited.

Solomon Ramsdell: A Novel of the Civil War Era

Launched on Kindle and in Paperback in Spring 2021

Click on the picture to see both versions on Amazon. Paperback details below . . .

Rosette's brother Solomon is one of the narrators of her novel, and his story--told in part in hers-- is perhaps even more compelling. Solomon married his sweetheart Jennette in 1858, and after they had two children together, he went to serve as a bugler in the Union Army. Captured at Trevilian Station, he spent months in the notorious Andersonville prison in Georgia, but he made it home--and then his troubles started.

Learn more and sign up for updates on his page at RosetteBook.com . 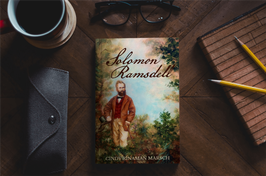 See the drop-down option to order ROSETTE at the same time. Please let me know if you desire a separate shipping address or any special dedication.

Solomon Alone or With Rosette
1

I had the delightful opportunity to work with Suzanne Fox on three of her intriguing anthologies about inspiration and mentoring in writing and other endeavors of the human spirit, and I was honored to contribute a chapter to this volume, explaining the origins of the novel Rosette.

Click on the picture to see this book on Amazon.

Special note: My husband Glenn Marsch, a molecular biophysicist, and my brother Chris Rinaman, a jazz musician, contributed chapters to another title from Suzanne Fox, The Mentor that Matters.

Moraine's Edge Books is in the business of editing carefully, writing deeply, and offering assistance for designing and publishing beautifully. Cindy Rinaman Marsch, M.A., operates Moraine's Edge Books, offers editing services privately and through Reedsy.com, and is a partner member of The Alliance of Independent Authors and an individual member of the Editorial Freelancers Association.

RosetteBook.com
Contact us by Email to discuss your project

Cindy Rinaman Marsch is a participant in the Amazon Services LLC Associates Program, an affiliate advertising program designed to provide a means for sites to earn advertising fees by advertising and linking to Amazon.com.